If you’re looking for an experienced PR and communications professional to enhance and protect your image, get in touch! I can create and manage strategies, events and campaigns and I handle negative publicity.

A former business journalist with more than 10 years in PR and a member of the Chartered Institute of Public Relations (CIPR), I’m used by private, public and third sector organisations to develop impactful PR to achieve their objectives.

Incorporating digital as well as traditional media, I use a toolbox to analyse and evaluate the performance of content to shape and execute strategy.

Most recently, I led a multi-media campaign to raise the profile of first aid for St John Ambulance, which was awarded Regional Campaign of the Year by the CIPR. I was also on the team that won the CIPR’s Best Healthcare award for the charity’s successful Chokeables video campaign.

GOLD for Regional Campaign of the Year 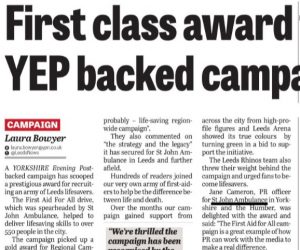 Delighted to announce that a campaign I ran for St John Ambulance in Yorkshire and the Humber last night won GOLD in the Regional Campaign of the Year category of the Chartered Institute of Public Relations (CIPR) 2015 PRide Awards.

The First Aid for All campaign, run with the Yorkshire Evening Post to encourage more than 500 people in Leeds to take first aid courses, also won SILVER for Best Low Budget Campaign (it only cost £100!).

The 12-month campaign required energy and creative thinking to provide fresh ideas for website and social media content, as well as a constant flow of traditional newspaper stories.

The awards judges said the scheme was a “remarkable – and very possibly life-saving region wide campaign”. They also commented on the “strategy and the legacy” it had secured for St John Ambulance in Leeds and further afield.

As a member of the award-winning PR team for first aid charity St John Ambulance for three years, I was involved in a number of successful print, broadcast and social media campaigns, with a brief for Yorkshire and the Humber.

Of particular note is a campaign I led with the Yorkshire Evening Post to get more people in Leeds trained in first aid and to boost the charity’s volunteer numbers. It was awarded Regional Campaign Gold in the CIPR Pride awards and Silver for Low Budget.

I was also on the team behind the Chokeables campaign, which won Gold in the CIPR national Healthcare campaign award. This multi-media campaign centred around an animation giving first aid advice using TV, radio, print and social media. It was viewed 6m times on Youtube, 2m times on Facebook and directly linked to saving the lives of 50 babies. 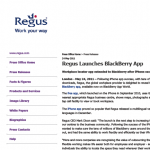 This release on the launch of a Blackberry App by office space provider Regus was written for international distribution.

I’ve also prepared by-lined features for this global organisation on topics including virtual offices, telecommuting and the value of face-to-face networking.

“Jane is a talented writer and photographer. Having worked in newspapers for many years, she knows exactly what they want and how they want it. I have used her services on behalf of my clients to great effect and will continue to do so.”